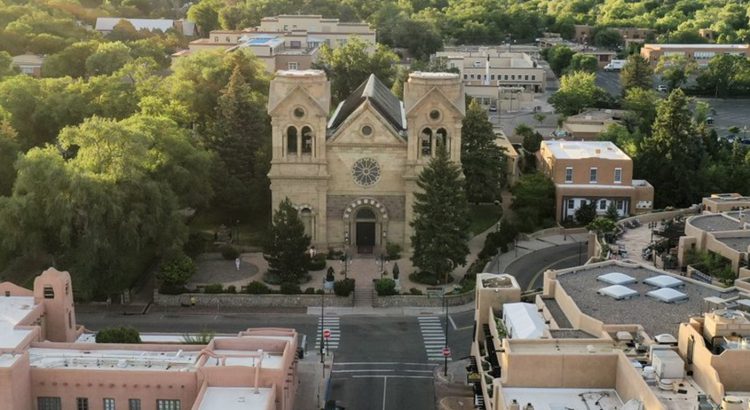 Nicknamed “The City Different,” Santa Fe has always been known for marching to the beat of its own drum. Its story stretches back to the 1600s, giving this Southwestern hub multiple centuries to grow into its imaginative, artistic self.

Today, the city shows off its wide array of historic sites, hundreds of art galleries, and perhaps the most colorful culinary scene in the country. To celebrate the New Mexican capital, here are some of the most 11 surprising facts about Santa Fe — and how you can best experience them for yourself.

1. Santa Fe is the oldest capital city in the continental US… 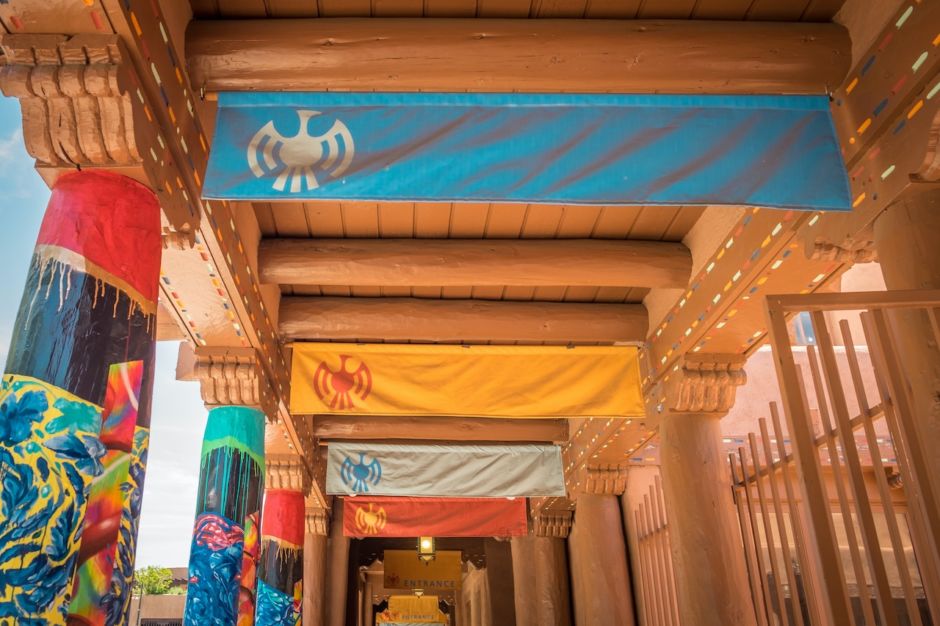 Established way back in 1607, Santa Fe first became a capital three years later, making it both the oldest capital city in the mainland US and the oldest European settlement west of the Mississippi. It also served as the capital of the Spanish “Kingdom of New Mexico,” the Mexican province of Nuevo Mejico, and as the principal city for the Spanish Empire north of the Rio Grande.

Of course, people had been living on and near the site of the city long before its Western founding — namely, communities of Pueblo Native Americans. Records show villages in the area dating back to the 11th century.

Experience it: Remarkably, buildings from the start of the Spanish era still stand. The Palace of the Governors has stood since the early 1600s — today, this historic adobe structure serves as New Mexico’s history museum, detailing the intervening 400-some years of life in the state. There’s a wonderful (daily!) Native American market here, where you can buy jewelry and tokens straight from the artists.

The San Miguel Chapel, aka the oldest church in the country or just “the oldest church,” also dates back to the early 1600s. Yes, it’s still standing — and putting on services twice a day (once in Latin).

2. …but the city’s native roots run even deeper. 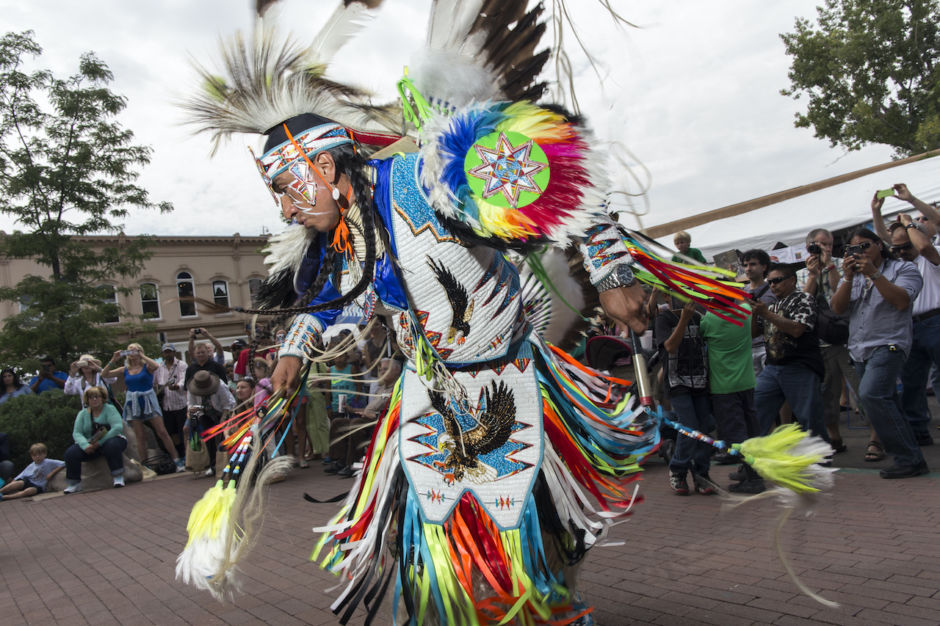 As in the 1600s, so today: A significant part of Santa Fe’s culture is connected to the 23 Native American Tribes, Nations, and Pueblos who reside in New Mexico. Each tribe comprises its own sovereign nation, so the rules, language, and culture change depending on who you’re visiting. Eight of the state’s 19 Native American Pueblos are located north of Santa Fe. Today, you can visit many of them — and you should.

Experience it: Numerous Indigenous celebrations are held throughout the year, with three notables in January alone: King’s Day Celebration, St. Ildefonso Feast Day, and St. Paul’s Feast Day. March is the quiet month for most Pueblos — be respectful, and don’t plan a visit then. Public events ramp back up in July and August with the anniversary of the 1680 Pueblo Revolt and Santa Clara Feast Day.

3. The landscape is more ski-basin than desert. 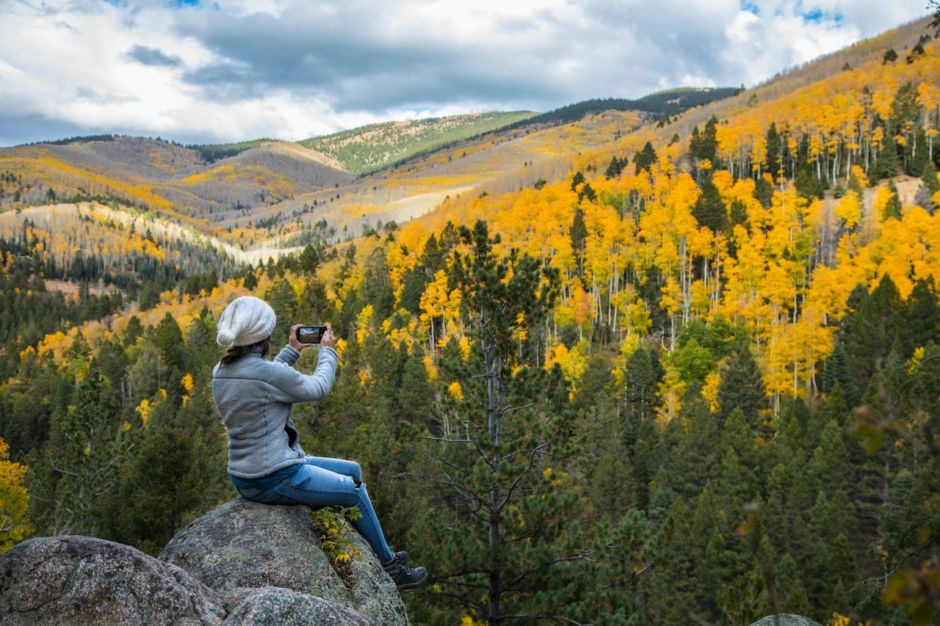 Contrary to popular belief, Santa Fe isn’t actually high desert — technically, it’s semi-arid steppe (with cold winters!). Even though the city gets 300 days of sunshine, locals get to experience all four seasons. This means you could easily plan multiple trips here throughout the year and visit at the perfect time to bike, hike, camp, climb, golf, and ski, all in turn.

Experience it: Santa Fe and its surroundings are stunning to explore on two wheels or your own two feet. This is especially true in fall, when the aspens change color and you can walk through the falling leaves. Try the Aspen Vista Trail off Hyde Park Road to see it for yourself.

In winter, Santa Fe trades hiking and biking gear for skis and boards. Ski Santa Fe — with a base elevation of 10,350ft — is only 16 miles from the city center and sees an average annual snowfall of 225 inches. Cross-country skiers and snowshoers can glide through the trees here, too. 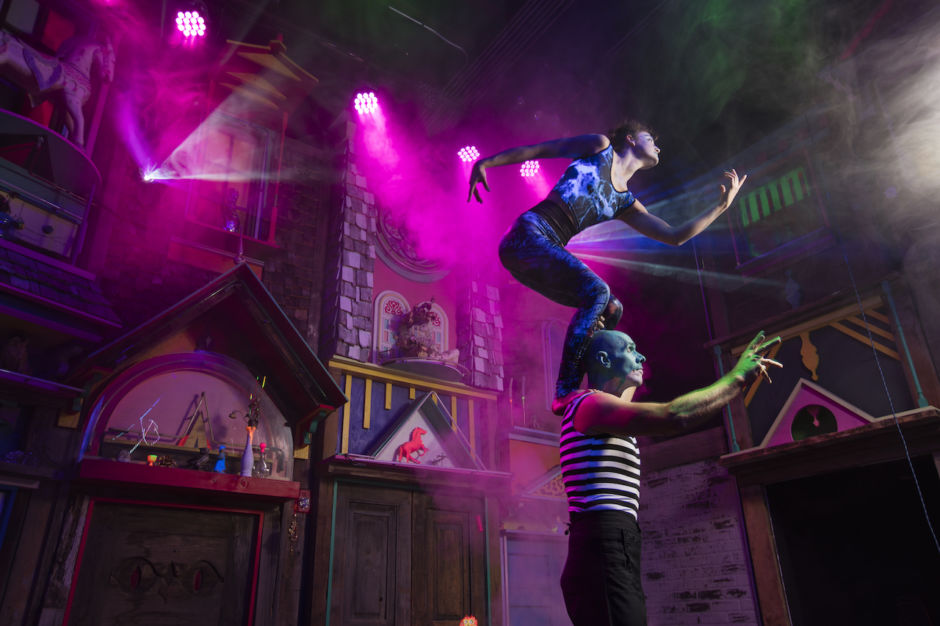 In 2005, Santa Fe made US history by becoming a UNESCO Creative City. One in 10 jobs in Santa Fe are connected to the arts, and the city has a vast creative scene spanning several districts and neighborhoods, each bolstered by locals and tourists alike. It would take months to explore it all…but that shouldn’t keep you from trying.

Experience it: Meow Wolf is to art what Hamilton is to theatre. The first permanent installation appeared in 2016, supported by Game of Thrones author George R.R. Martin (who happens to live in Santa Fe). Meow Wolf’s House of Eternal Return takes guests through a mystery house full of secret passageways and surrealist creations. Another recommended creative experience is SITE Santa Fe, a modern art museum with exhibits that are constantly in flux.

5. …and it’s one of the largest art markets in the US. 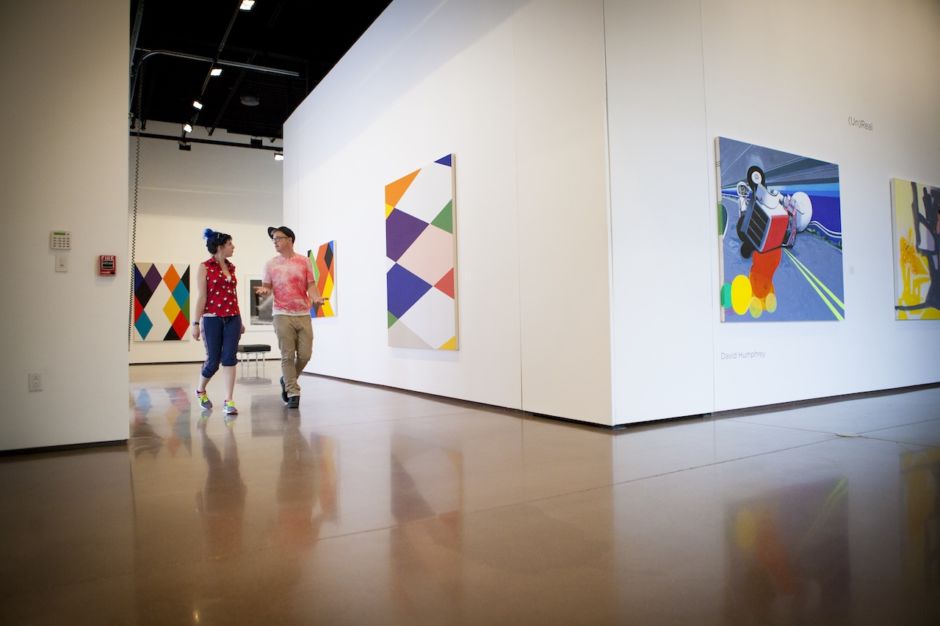 Santa Fe didn’t become an art powerhouse overnight — like most facts about the city, this one has a long backstory. Artists first began to migrate to Santa Fe in the late 1800s, mesmerized by the landscape, the culture, and the adobe architecture. This trend never really stopped, and the city embraced it with the establishment of the New Mexico Museum of Art in 1917.

Today, The City Different is home to a whopping 250+ galleries, 100 or so of which are located on the winding Canyon Road. During the summer, Santa Fe also holds a number of art festivals and markets (but more on that later).

Experience it: If you’d like to meet local artists, visit Santa Fe on a Friday night, when many galleries — especially in the summer — hold public openings. Since the Canyon Road galleries are right next door to each other, this is the ideal place to begin exploring the city’s art scene. Meanwhile, if you’re looking for more contemporary art, head to the Railyard District. 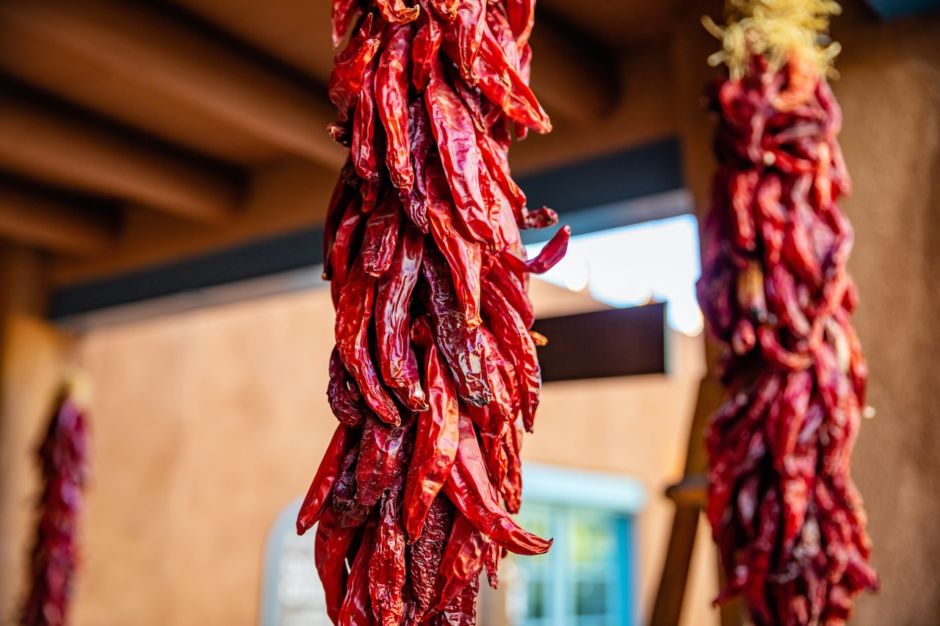 Whether you’re hitting up a local-favorite diner for traditional New Mexican cuisine or looking for one of the city’s many imaginative twists on the original, New Mexican food is hard to beat. The keystone ingredient is chile — green is usually spicier than red, but if you’re not sure which one to order, you can always say “Christmas!” and try both. (Tip: Try both.)

Experience it: Eat everything you can in Santa Fe. Try a breakfast burrito smothered with green chile at Tia Sophia’s, then head over to Tortilla Flats — next to Meow Wolf — for their red chile pork ribs. If you aren’t busting at the seams with New Mexican food by this point, go for the sopapillas at La Choza.

If you hit your chile quota (apparently some people have one), try Jambo for some great jerk chicken or Cowgirl BBQ for their ribs sans chile (they also have karaoke!). To get the best deals at tons of different restaurants around town, consider planning a trip during Santa Fe Restaurant Week (late February), when restaurants offer special prix fixe menus.

7. …while The Santa Fe Opera is nothing short of world-famous. 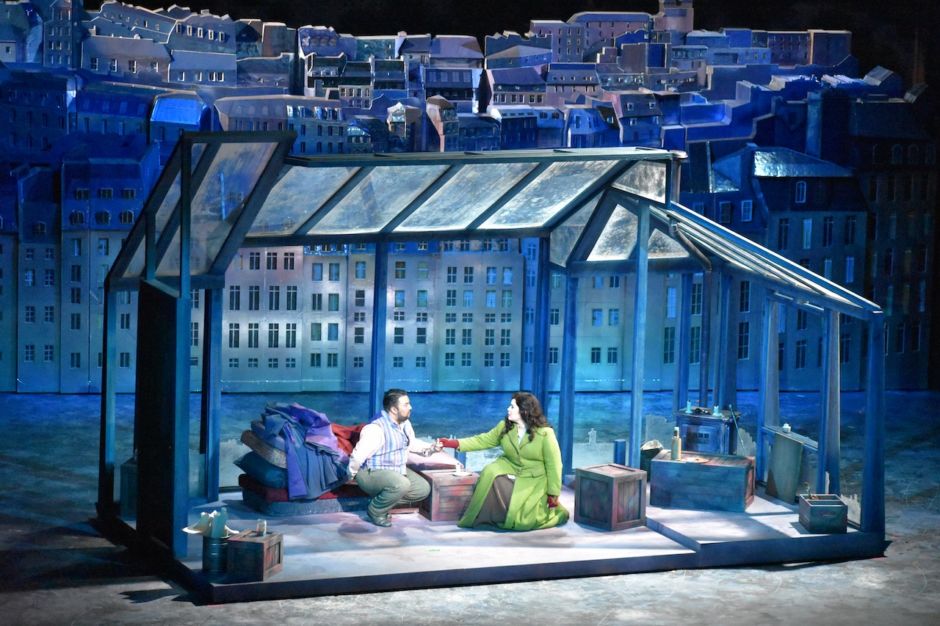 This is possibly the best opera company in the country (just ask RBG). The opera house itself is equally impressive, an open-air adobe structure framing views of the mountains to the east and those intense New Mexico sunsets to the west. Since it first opened in 1957, The Santa Fe Opera has put on 170 different productions (totaling more than 2,000 performances), 16 of which have been world premieres.

Experience it: Shows happen most regularly in the summer. The 2020 season will host some classics — including The Barber of Seville and The Magic Flute — as well as the world premiere of M. Butterfly. Don’t miss the tradition of tailgating in the parking lot beforehand, either. Come early, bring chairs, bring decorations, or just order a tailgate box and people-watch. 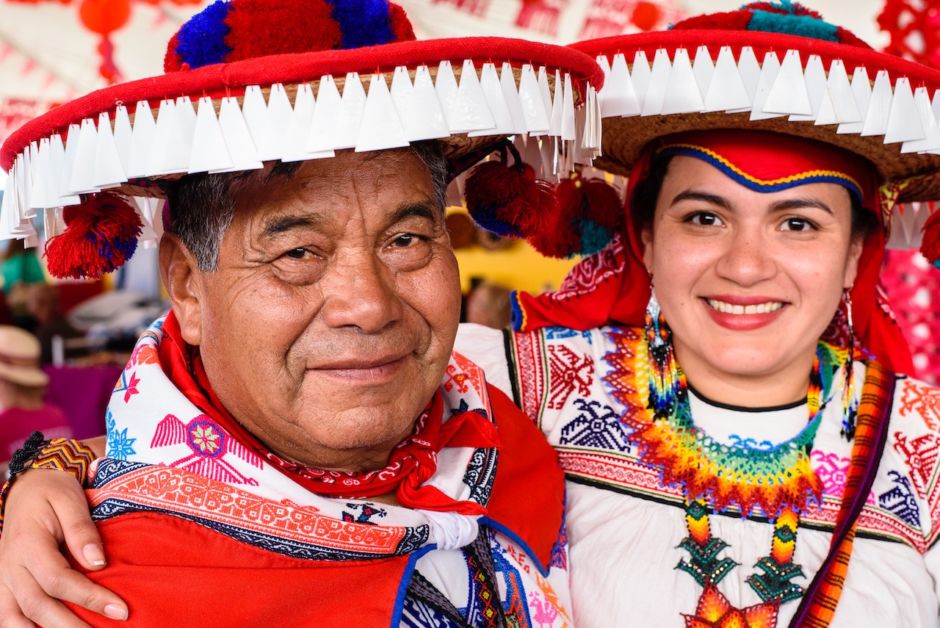 In addition to the hundreds of art galleries around town, Santa Fe also hosts various art markets. They’re mostly held in the summer and feature a blend of Anglo, Native American, Spanish, and international art. Think of your local farmers market, and then imagine it 10x bigger and creative-ified.

Experience it: Start with the International Folk Art Market, which takes place in July and showcases folk art from 52 different countries. That same month you’ll have the chance to hit up the Contemporary Hispanic Market and the Traditional Spanish Market, which celebrate Hispanic culture (including dance, music, and food), and the second annual Santa Fe Art Week, where 100+ events are planned across the city’s museums, attractions, and 250+ galleries.

If you can, definitely stick around for the Santa Fe Indian Market held in mid-August — it’s the largest art market dedicated to Native American art in the world.

9. So many famous writers and artists have lived here (and still do). 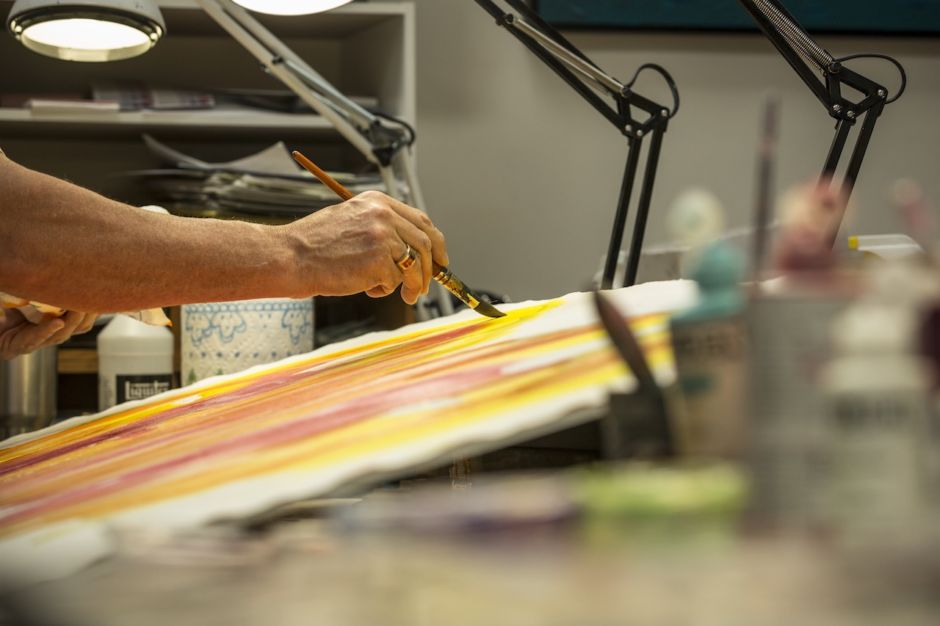 Considering just how many people work in the creative sector in Santa Fe, it’s no surprise that some of them are well-known faces. Perhaps the most famous of the local artist contingent was Georgia O’Keeffe, a 20th-century painter known for her vibrant depictions of flowers. As mentioned above, Game of Thrones writer George R.R. Martin currently resides in Santa Fe, and other notable past residents have included D.H. Lawrence and Willa Cather.

Experience it: It would only be fitting to see O’Keeffe’s work in the place that inspired it. The Georgia O’Keeffe Museum, located downtown, features not only her paintings but exhibits on her creative process as well. If you have a car and some extra time, you can also venture north to Ghost Ranch, one of O’Keeffe’s first homes.

Those more interested in Santa Fe’s writers should plan to be in town in October 2020 for the very first Santa Fe Literature Week, an entire week dedicated to the city’s literary past, present, and future.

10. This is one of the most romantic cities in the country. 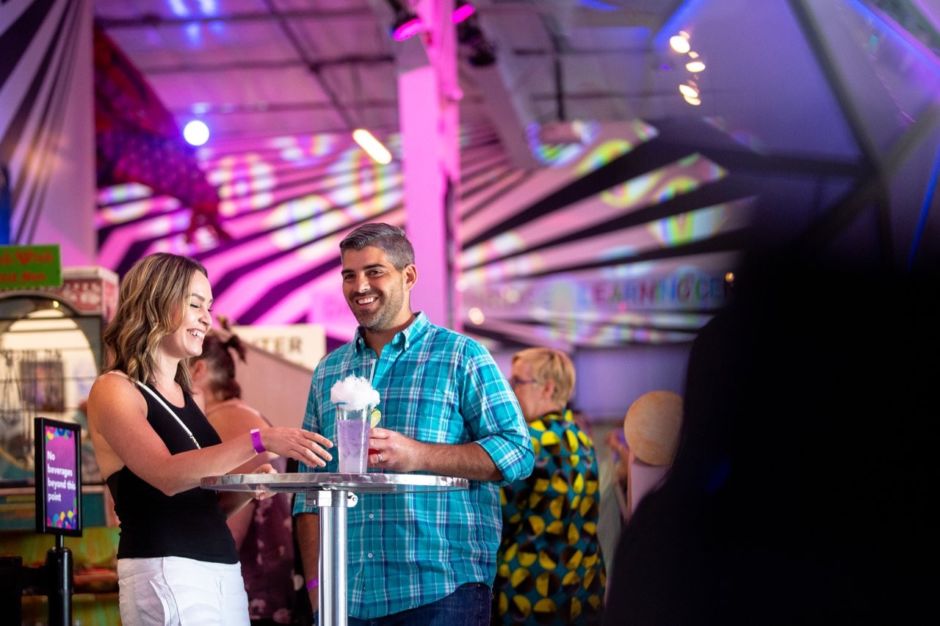 Santa Fe regularly rakes in the accolades, and romance is always one of its medals. Artists’ cities tend to have an emotional ambiance to them, and there’s something magical about the meeting of ancient cultures with red-and-green vineyards, hills rolling into mountains, and the golds and tans of adobe-style architecture melting into the warm hues of a Santa Fe sunset.

If you’re here to feel the love, grab an “herbal aphrodisiac” at Kakawa Chocolate House, tour the Estrella del Norte vineyards, dine next to a piñon fire at Rio Chama Steakhouse, and grab a couple’s massage at the Japanese-style Ten Thousand Waves, a world-class spa with private outdoor baths set in a forest of juniper and pine.

11. The best trail in town might just be the Margarita Trail. 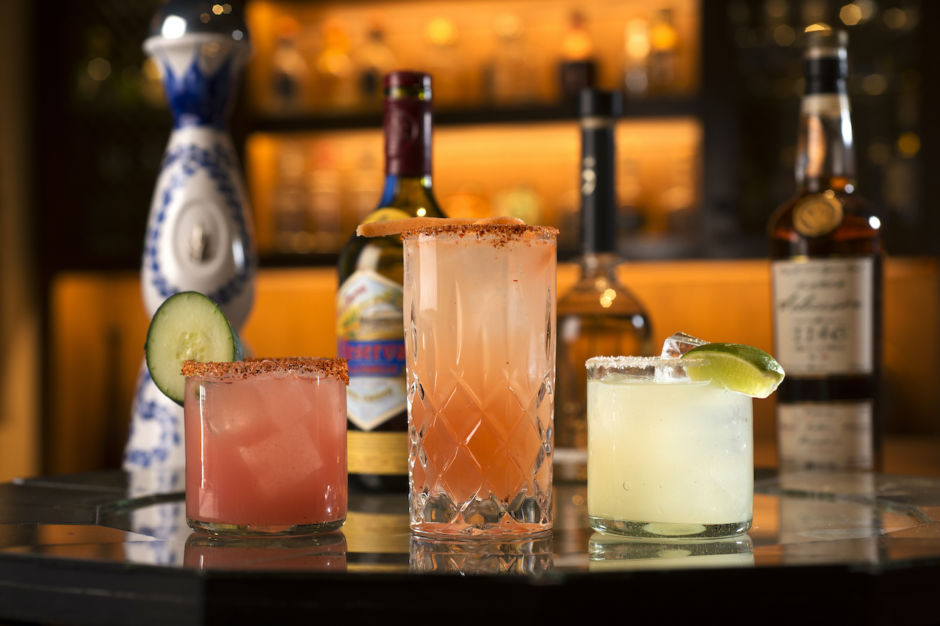 The Santa Fe Margarita Trail includes 45 different margaritas, each of which has been crafted specifically for the trail by a local establishment. Some particularly special concoctions to look out for include the Amaya Jalapeno Margarita (Amaya at Hotel Santa Fe), the Santa Cafe Chipotle Margarita (Santacafé), the MadChile Margarita (Mine Shaft Tavern), and the Juliarita Margarita (named after Julia Staab, the resident ghost at La Posada de Santa Fe).

So, we hope that you will enjoy all the 11 surprising facts about Santa Fe once you travel to new mexico.