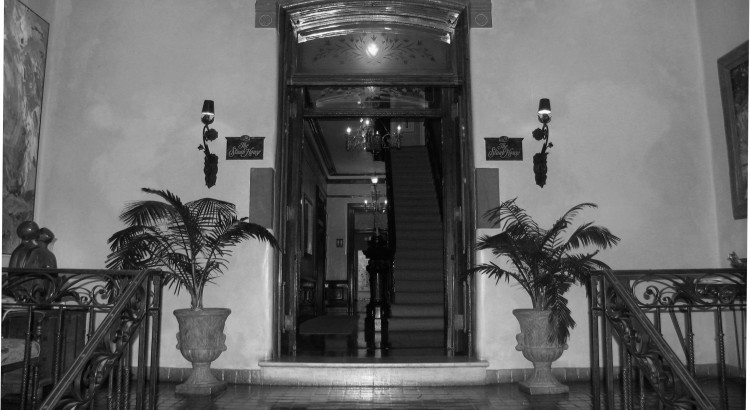 If you love history – disturbing history, you’ve come to the right place. Santa Fe, New Mexico’s rich past is preserved in spooky historic sites located throughout the city. With such a layered history, Santa Fe draws visitors back over and over again to uncover a fascinating past and experience its unforgettable present. So, as the crisp fall air descends and the nights get longer in The City Different, it is time to share with you a few spooky ghost tales that add to the richness of this city’s history.

Just off of the lobby of La Fonda Hotel is the La Plazuela restaurant, once a courtyard of the old hotel. Dignitaries and historians stayed at the inn. Legend has it that one high ranking politician who was a guest there, caught his wife with another dignitary and killed the man. At that time justice was swift and severe and the politician was hung from the limbs of one of the courtyard’s trees. Many years later, the ghost of the man is said to still be seen in the restaurant, wandering about aimlessly.

Cigar-smoking nun, Sister George haunts the Inn And Spa At Loretto in Santa Fe. She was a member of The Order Of The Sisters Of Loretto and taught at the Loretto Academy, a Catholic girls’ school located where the hotel is now from 1953 until 1968.

As recanted by the Santa Fe Travelers blog, “The first reports of her presence, according to local tour guide and ghost expert, John Lorenzen, were in the late 1970s. Owners of The Three Sisters Boutique, a shop located at the hotel, had some interesting experiences. Every morning, there was an extra ten-dollar bill in the cash drawer. One day, according to witnesses, a rack of clothing levitated. Reportedly, the lights would go on and off in the shop and the odor of cigar-smoke would permeate the air. No one knows if the corporal Sister George actually wielded a stogie.”

Spend The Night In Room 256

Located on six historically rich acres in downtown Santa Fe is the historic La Posada de Santa Fe resort. Within its beautiful landscaped grounds and fountains sits the hotel’s centerpiece, the Staab House, a Victorian mansion built by an old  Santa Fe Trail merchant in 1882. Amassing a fortune as a major supply contractor for the U.S. Army during the Civil War, Abraham Staab built the beautiful three-story brick mansion for his wife Julia

The large Staab family, including six children, primarily lived on the second floor, accessed by a grand staircase. On the third floor was a beautiful ballroom which soon became one of the social entertainment centers of Santa Fe society, as Julia loved to show off the home that she adored.

However, the Staab family’s fairy tale life was to end when Julia’s seventh child, a son, died soon after his birth. Deeply affecting, Julia, she dived into a deep depression and her hair was said to have turned prematurely white. After this child’s death, Julia underwent several more unsuccessful pregnancies and eventually took to her room, where she spent almost all of her time until her death at the age of 52 in 1896.  Rumors at the time persisted that in Julia’s later years, she became mentally deranged.

Across the narrow street from the church is the oldest house in the United States, which is supposedly haunted by a malevolent presence. In fact the entire block surrounding San Miguel dates back to the 1200s and was once the site of an ancient Indian Pueblo. For centuries,  events have occurred within this block including the Pueblo Revolt against the Spanish in 1680, executions of convicted criminals and much more. Not only are the church and the oldest house said to be home to a ghost or two, but the entire block. The church is located at 401 Old  Santa Fe Trail.

Santa Fe’s spooky ghost history can be more than great stories. The city boasts a number of ghost tours you can take on your next visit to Santa Fe.